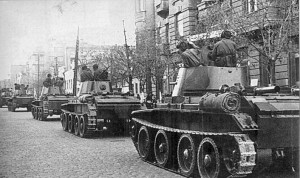 For many Ukrainians, the war began exactly on 1 September 1939 (the official date for the start of World War II).

On this day, Germany attacked Poland, and the Luftwaffe’s dive-bombers bombarded Lviv. During the first half of September, other western Ukrainian cities also fell victim to the bombardment of German forces: Lutsk, Stanislaviv (now Ivano-Frankivsk), Ternopil, Drohobych, Sarny, Yavoriv, Stryi and others.

Among the one million soldiers in the Polish army who confronted the enemy on the western edges of the country, over 100,000 were Ukrainian. In September 1939 alone, close to 8,000 Ukrainian citizens of Poland died in battle. As it continued its advance, the Wehrmacht crossed over the boundaries of Galicia and began the siege of Lviv. The German-Polish front extended along the southern region of contemporary Lviv Oblast.

Meanwhile, the OUN viewed the German attack with the prospect of possible liberation from Polish oppression and the establishment of an independent state, which would explain why Ukrainian nationalists initiated an uprising in several regions of Western Ukraine. In addition, several hundred Ukrainians entered the war on the side of Germany in the ranks of the VVN (Viiskovi viddily natsionalistiv or Armed nationalist detachments of the OUN), known also as the «Sushko Legion».

On 17 September 1939, peacetime ended for thousands of Ukrainian Soviet soldiers who had crossed the eastern Polish border. Although skirmishes between the Red Army and Polish forces were episodic and insignificant, peoples’ lives were nevertheless lost.

The tragedy of the Ukrainian people was the inevitability of fighting against one another in the ranks of opposing armies.