In Ukraine it is correct to refer to the “Great Patriotic War” and not the “Second World War. 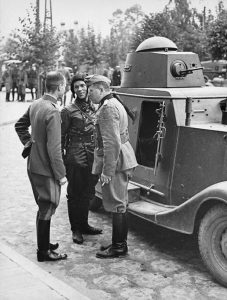 The Battalion Commissar of the 29th tank brigade of the Red Workers’ and Peasants’ Army (RKKA), V. Borovitski with German officers in an armored car BA-20 (Brest-Litovsk).

The “Great Patriotic War” is the Soviet term for the armed conflict between the USSR and Germany, which was an integral chapter of World War II.

Ukraine’s participation in the Second World War was not confined to the period of conflict between the USSR and Germany during the years 1941–45. Therefore, when considering the history of Ukraine, it is correct to refer to the Second World War as a whole. This war affected the territory of Ukraine from the outset, and Ukrainian soldiers and officers took part in the conflict up to its final day, i.e. 2 September 1945.

The “Great Patriotic War” is a Soviet historiographic and ideological concept, which the Russian Federation continues to utilize with the intent of maintaining its influence over Ukraine and other post-Soviet republics.

The “Great Patriotic War” is portrayed as a glorious historical achievement which became possible only as a result of Russia’s consolidation of the “Soviet people.” Accordingly, such relations (the Kremlin’s subjugation of Ukraine) are considered historically justified and obligatory in the future.

The concept of the “Great Patriotic War” proposes a scaled-down model where the USSR embodied the “forces of good” and its enemies represented the “forces of evil.” As a result, the Ukrainian anti-Soviet movement for national liberation of the mid-20th century is cast in a negative light. The further advancement of such an interpretation of the Soviet-German war has led to an ever-deepening rift in Ukrainian society. Moreover, contemporary anti-Ukrainian, pro-Russian forces in Ukraine vie for positions of influence in order to continue propagating the “glorious” struggles of the USSR in the “Great Patriotic War,” while Ukrainian patriots continue to be labeled “fascists.”

Finally, attempts to alter the methods of studying the history of the Second World War—by promoting the concept of the “Great Patriotic War”—are actually an effort to hide the truth about the USSR’s complicity between 1939–41, namely the Kremlin’s collaboration with Nazi Germany.