Ukraine and Malorossiia are one and the same

Malorossiia is one of the historical regional titles for Central and Left-Bank Ukraine (the Hetmanate) during the second half of the 17th and 18th centuries.

Map of Malorossiian gubernia which is consisted of 20 districts (1800)

“Malorossiia” historically does not refer to the territory encompassing all of present day Ukraine. It also does not include all of the lands where Ukrainians or their ancestors settled. In fact, the term “Malorossia” is a more recent construction that postdates the name Ukraine.

The name “Malorossiia” originates from the term Mala Rus’ (Rus’ Minor). Mala Rus’ appears in 14th-15th century Church usage in reference to the Galician and Kyivan metropolitanates. Mala Rus’ is also used as a name for those lands of Rus’ that were part of the Grand Duchy of Lithuania and the Kingdom of Poland in the 15th-16th centuries. In the first half of the 17th century Mala Rus’ assumes an additional meaning as a name that distinguished the Kyivan Metropolitanate from the Moscow Patriarchate (see: “Are Mala Rus’ and Malorossiia one and the same?” and “Are Rus’ and Russia one and the same?”).

After the middle of the 17th century, the term “Malorossiia” (also “Mala Rossiia”) begins to signify the state established by Bohdan Khmelnytsky in and around Dnipro-Ukraine (also known as the Zaporozhian Host or Hetmanate). This term enjoys wide usage in communications primarily with Muscovy. The Zaporozhian Host was led by the Hetman, to whom the Cossack army as well as the local administration created by the Cossack officer-elite were subordinate (see: “Zaporizhya and Zaporozhian Host—are they one and the same?”). Territorially, the Hetmanate was divided into regiments which in turn were divided into companies. As a result, the Hetmanate’s cities consisted of regimental and company garrisons. 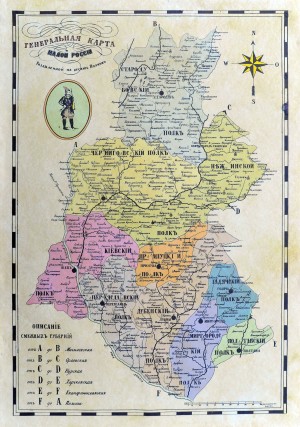 Following the 1667 Treaty of Andrusovo, the Zaporozhian Host is officially divided along the Dnipro river between Muscovy and the Polish Commonwealth. The Zaporozhian Host’s autonomous status and the term “Malorossiia” are both retained in the section of Left- Bank Ukraine ceded to Moscow. But over time the Russian Empire reduces Hetmanate autonomy. The last Hetman, Kyrylo Rozumovsky, is forced to relinquish his duties in 1764. The regimental territorial system of the Hetmanate is liquidated in 1781 by decree. Eventually, the Cossack officer-elite becomes integrated into the Russian nobility, being enticed by the possibility of career advancement in the service to the empire.

Russian bureaucrats in short order create a new “Malorossiian” gubernia from the territory of the Hetmanate and in 1802 partition it into Chernihiv and Poltava gubernias. Between 1802 and 1856 the Malorossiian General Governorship administered these gubernias and also Kharkiv gubernia starting from 1836.

The meaning of the term “Malorossiia” varies significantly throughout the 19th and early 20th centuries. It is a term that signified a close association between Ukraine (i.e., Little Russia) and Russia. It also is a term that distinguished Ukraine from Russia. The first meaning fits neatly into the imperial mold of depicting and promoting the image of a “tri-state unified Rus’” and “tri-lateral united Russian nation” (comprised of Great Russians, Little (Malo) Russians and White Russians). The second meaning comes from regional patriotism, evident among educated representatives of Malorossiian circles, who relished recollections of Malorossiia’s previous autonomous status and Cossack freedom. The nostalgia for such historic experiences helped pave the way for the modern Ukrainian national movement.

And although in czarist times the term “malorosy” (inhabitants of Malorossia) did embed itself strongly in the mindset of Ukrainians, “Malorossiia” per se as a historical region did not spread to the southern and western Ukrainian lands. In fact, it remained physically within the boundaries of Left-Bank Ukraine. Indeed, in order to properly define the broad area of malorosy (Ukrainian) settlements in the 19th century, the need arose for a different term, namely “Ukraine”.

Towards the end of the 19th century and early 1900s the term “Malorossiia” took on a somewhat negative connotation, especially for the Ukrainian national movement in Imperial Russia. It came to be associated with the provincial inferiority complex known as “malorossiistvo” (Little Russianness).